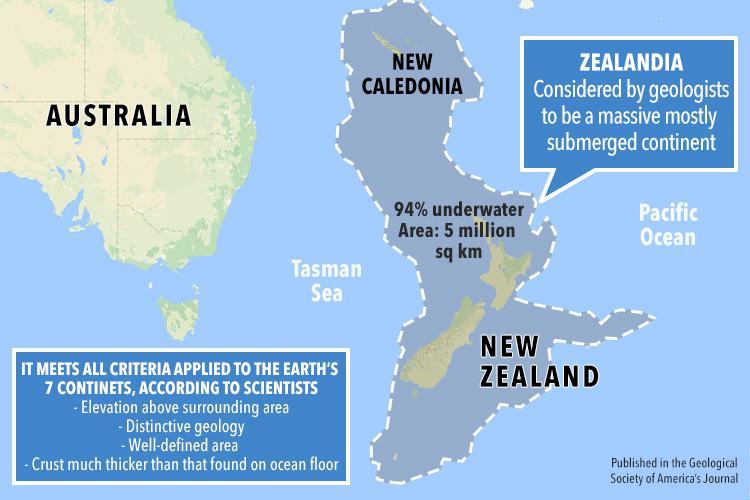 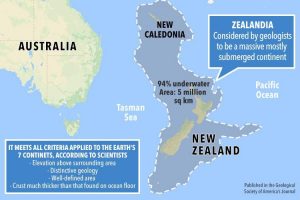 In this amazing time of dazzling and amazing space exploration, it is funny to think that there are large areas of the earth that still hold many mysteries.  Zealandia is a huge land mass (about two-thirds the size of neighboring Australia) that once was a part of the Gondwana super-continent but broke away from what is now the continent of Australia and sank around 75 million years ago.  Today Zealandia which is estimated to measure 1.9 million sq miles (5m sq km), is almost entirely submerged in the southwest Pacific, except for New Zealand’s North and South Islands, New Caledonia and two Australian islands, Lord Howe Island and Norfolk Island.

New Zealand geologist Nick Mortimer in a paper published in February 2017 in the Geological Society of America’s Journal, said scientists have been lacking research data to completely make the case for Zealandia being the eighth continent for more than 20 years.  After using new satellite and mapping data, Mortimer and team say that Zealandia is not just a group of “submerged continental fragments” but a unified landmass and therefore should be assigned continent status.  Zealandia seems to meet all the criteria established to be considered a continent:

Today 30 scientists from the International Ocean Discovery Program (IODP) will set sail from Australia on drill ship Joides Resolutionon for a two-month voyage to gain more details and more firmly establish Zealandia as earth’s eighth continent.  The drilling expedition is setup to take the recovered sediments and rocks lying deep beneath the sea bed and study it with the equipment they have onboard, to gain more insight on how this area behaved over the past tens of millions of years: including sub-seafloor life, plate tectonics and earthquake-generating zones.

Editor and writer Ben Michaels has covered various segments of the tech industry, ranging from social networking companies like Facebook and Twitter to enterprise technology advancements and software. He also dabbles in programming using JAVA and Python along with Android development.  He studied mathematics and computer science, at the University of Michigan and worked at large enterprise software companies in marketing management before becoming a free lance writer and web entrepreneur.